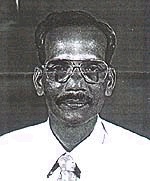 The year 2002 marks the completion of 150 years of my Alma Mater, the Uduppiddy American Mission College, during all of which this institution helped dispel darkness with the light of knowledge for several generations of youngsters many of whom later excelled and made their mark in various spheres of life both here and abroad.

It is said that the country’s then colonial British administration, perhaps understandably wishing to put as much distance between itself and a group of missionaries from one of its former colonies, diplomatically got the point across that the Americans were more welcome to expend their missionary zeal in the north of the island rather than in the city of Colombo and its suburbs. And so it was that the American Ceylon Mission went North-wards and set up Jaffna College and other major educational institutions that were to greatly benefit the people of the Northern Province.

It was during the stewardship of Mr. S. K. Rasiah, the Principal from 1932 to 1938, that the English School began having classes up to the 8th standard. The late K. Kandiah, OBE, an internationally acclaimed Atomic Energy Scientist, the late Hon. T. Ramalingam, M.P. for Point Pedro Electorate (Vadamaradtchy) and the late Justice P. Sriskandarajah, Supreme Court Judge, were three of the distinguished old boys of that era. In later years the College produced many distinguished citizens including Mr. A. Arulpragasam of the Ceylon Civil Service who rose to the position of Commissioner of Elections, and Prof. A. Thurairajah, well known for his tireless efforts and dedicated service as the Vice-Chancellor of the University of Jaffna.

It was in 1939 that Mr. K. T. John took over as Principal of the College, a post held till 1956. His dynamic leadership gave the College a new lease of life.

Mr. John, a native of Kerala, India, soon came to be regarded as “Father” of the College by both teachers and students of several generations. To him, the staff and students were very much a part of his own extended “family” and he guided both with a degree of dedication and love that was truly paternal. No wonder, then, that he is still fondly remembered by thousands of past pupils of the College of that era. It was Mr. John who, in 1941, amalgamated the Swabasha Development School and the English Language School into a single institution under the name “Uduppidy American Mission College”. Thanks to his efforts, the College began preparing students for the S.S.C. from 1942. Laboratory and Library facilities and the basic infrastructure such as pipe-borne water system and toilet facilities at the College were provided during his tenure of office.

Furthermore, it was Mr. John who introduced the College crest with the motto “Light dispels Darkness”, so reminiscent of Rabindranath Tagore’s concept of education. As does the Sun, so do teachers dispel the darkness and help students blossom out like the petals of the Lotus flower.

The first prize-giving ceremony after the amalgamation of the two schools was held in March 1946. In his address at the Prize-Giving held in 1950, Mr. John had this to say:

“This college has grown in numbers. The number on roll now stands at 630. Last year it was 530. For lack of accommodation we had to refuse admission to a good number of boys and to the large number of girls that sought admission. The question has often been asked why there should be girls here when there is a girls school under the same management next door. I cannot answer this question except by saying that some parents insist on their children being admitted here. In these days when we make much of the parents’ freedom to choose the schools for their children, I don’t’ know how we can refuse admission except for lack of space. I am not going to nor am I competent to discuss the merits or otherwise of co-education” extra-curricular activities for students in the field of sports introduced by Mr. John included scouting, football, basketball, netball and volleyball.

There were 256 students on the College roll when he assumed the office of Principal. That number had risen to 608 when he retired in 1956. Our Alma Mater’s sister-college, Uduppiddy Girls’ English School, established in 1868 by the American Ceylon Mission, had classes only up to S.S.C., after which the girls were admitted to the H.S.C. classes conducted by the College.

When Mr. John retired and returned to Kerala in 1956, his lieutenant, Mr. S. S. Selvadurai, the then Vice Principal, succeeded him. Mr. Selvadurai, whose speciality was chemistry, gave special attention to further improving the teaching of science subjects at the College and, thanks to his efforts, H.S.C. classes commenced and the College upgraded as Grade 1.

The years from 1971 to 1997 was indeed a period of flux with the College having a succession of 14 Principals in those 26 years. That, coupled with the adverse effects of standardization introduced by the Government as well as the North-East conflict, proved to be a severe setback to the school. The ethnic war also prompted many students to emigrate to Canada.

In 1987 our Alma Mater was an unfortunate victim of “operation Liberation” launched by the military forces. The school buildings (including the well-equipped laboratories and library) were bombed and destroyed on the night of 11th July 1987. Valuable historical records and documents too were destroyed that night. Consequently, classes could not be conducted in the school itself and had to be conducted in temporary sheds and cottages put up in the school playground — Shanmuga Valawu — and in a tutory close by and in the residence of a teacher. Mr. K. Sithamparappillai, an old boy and a member of the teaching staff, took over the reins of the College during the crisis and rendered yeoman service with the assistance of old boys like Prof. A. Thurairajah.

Mr. Sithamparapillai retired and another old boy, Mr. V. T. Selvaratnam, functioned as the Principal for a short period. Mr. N. Anantharaj (also an old boy) succeeded him on the 2nd February 2002. When he took over classes were continuing to be held in the temporary sheds in the playground and in a number of private residences. “School classes were held all over Uduppiddy” was how he described it.

In 1995 temporary sheds were put at the College premises and the classes from Form 8 to Form 13 were conducted there. In 1996, 21 students entered the University from the College, keeping our flag flying high.

Thereafter Mr. S. Thilaimpalan who was the Vice Principal acted as the Principal 1996, but could not continue for long because of ill-health.

G.T.Z., a German NGO’s contribution of a two storey-building to the College needs to be acknowledged with gratitude. It was declared open on the 6th July, 1998. It is during Mr. Nadarajah’s tenure that modern toilet facilities, a Library, Computer center, Secretariat and Children’s park were set up, besides the restoration of the pipe-borne water system.

Students of the College excelled in sports such as football and also participated in cultural activities. Special mention should be made of the valuable contribution made by the Principals and the staff in instilling discipline in their students and making them responsible citizens.

Despite the difficulties faced by them and the lack of basic facilities, the Principals, the staff and students worked hard to uphold the good name of the College. Past Pupils and, in particular, the members of the Canada branch of the Past Pupils’ Association and of the Colombo branch of PPA have extended much assistance to their Alma Mater.

Thanks to the initiative of the Colombo Branch of the PPA the Government is issuing a stamp to commemorate 150 years of our Alma Mater on the 19th October, 2002 at Uduppiddy, and the Colombo branch is also sponsoring the publication of a special souvenir. This article is based on the many contributions from past pupils to the Souvenir.